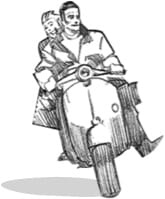 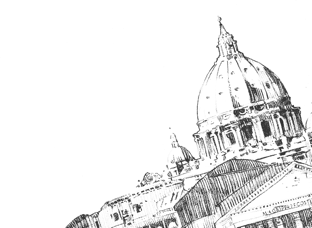 Our building, goes back to Medieval times, with its foundations on the walls of Pompey’s Theater (I century B.C), a huge piece of marble of which can steel been in the hall. The first four floors go back to Middle Age; the last two were added in the 18th century. The building has been totally restored in 2001, whilst the apartments has been renovated in 2008, with all the modern comforts available. They are very elegantly furnished with original medieval “cassettone” ceilings and “cotto” flooring. This building is included in the “Parione” ward (it was the 6th Roman ward). The name “Parione” comes from the latin peries (wall) and it is probably connected with a huge remain of a Roman wall as in antiquity this district was rich in impressive monuments.
The great Roman general Pompey erected here several important buildings: a huge theatre (teatro di Pompeo) topped with a Temple dedicated to Venus Victrix (Venus victorious), a portico of massive dimentions just behind the theatre Stage, having at its end an esedra, and a Curia (a meeting point of the Roman Senate). The theatre built by Pompey, seating 18,000 spectators, was the first permanent theatre in Rome and the first built in stone. It was inaugurated in 65 BC with literary and musical events and with animal fights lasting several days. It seems that 20 elephants, 100 lions and a lot of linxes were massacred in that occasion! Plenty more could be said about our apartments and their wonderful historical surroundings, but the best thing to do is to experience personally their magic atmosphere.